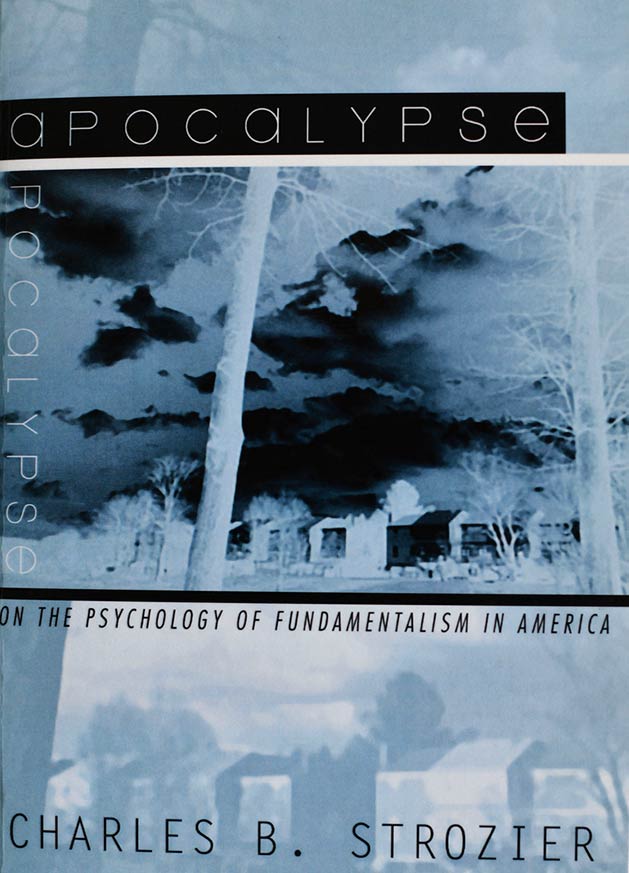 This book offers a rare and intimate look at the inner lives of those Christians drawn to the apocalyptic tradition. Based on extensive interviews and several years of field work.

Apocalypse Offers an in-depth exploration of Christian fundamentalism and unique insights into the psychology of their thinking on a wide variety of issues.

What the Critics Say

“This beautifully written book illuminates a profoundly important strand of American religious culture that has been too long ignored.  A substantial achievement.

Paul Boyer, author of When Time Shall Be No More: Prophecy
Belief in Modern American Culture

Strozier brings down to earch and to our time believers who say they cannot wait for an end to earth and beginning of God’s new time.  They may carry the kind of ‘Repent!’ sign one associates with prophets in cartoons.  Mr. Strozier figuratively carries one that says ‘Understand!’”

“Strozier uses psychohistory to examine the apocalyptic outlook of fundamentalists in New York City. He admits to possible bias as a lapsed nominal Christian and to studying a narrow geographical milieu. He spent several years becoming close to and interviewing a widely varied mix of individuals, from a former prostitute to a preacher. He avoids condescension but remains unable to accept his subjects’ beliefs. The common theme of the “broken thread,” in which the evil past is rejected in favor of a God-transformed future, permeates these beliefs, as do biblical literalism and a fascination with endless violence, with the agency of violence shifted to God. Filled with insightful vignettes.”

“The author spent five years attending services and interviewing Pentecostals, Baptists and Evangelicals in New York City. His 27 respondents–among them an ex-prostitute, a multimillionaire entrepreneur turned missionary, a fiery preacher and a Wall Street broker–regarded their past as sinful or worthless. Their born-again experiences, in Strozier’s formulation, represent attempts to heal traumatized, fractured selves. The final chapters of this cogent, worthy study attempt to place Christian fundamentalism on a continuum of apocalyptic belief by contrasting it with Hopi Indians’ myths of impending eco-catastrophe and with New Age premonitions of a dawning Aquarian Age.”

“Strozier bases his study on five years as a participant/observer at four New York City churches and on interviews with church members. He finds that fundamentalist discourse is permeated with images of violence and circles around the problems of guilt and shame. Strozier takes care not to caricature his informants or to treat their beliefs as pathological. In some cases, he sees them as leading towards a greater engagement with life, e.g., the Reverend Charles and his Harlem congregation, for whom the apocalyptic vision is an urgent call to greater awareness and social action. Typically, however, he notes a profound split separating believers from an ever more rotten world, and their own sinful past from their present perceived purity. Human beings can bring nothing to their redemption, according to this view, and there is a dissociative shift in agency toward an angry God who dooms sinners to a genocidal cleansing. Strozier offers some penetrating insights along the way . . .”